TreeFest is a fundraiser for the Bloomsburg Theatre Ensemble (BTE) that began in 1989. The idea for the event came from BTE’s administrative director. There are other tree fests, but ours is unique: 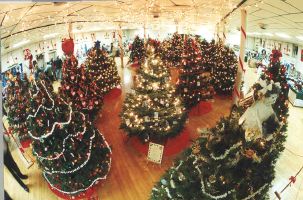 Trees are donated by local growers. They are sponsored by local businesses and individuals and decorated by community groups. The trees are displayed on the two weekends following Thanksgiving (Adult admission is $5). After the show, the trees and their decorations are donated to families in need. Almost from the beginning, the show has included continuous entertainment and food at the TreeFest Cafe. This basic model has not changed during the time that TreeFest has been in existence.

The original TreeFest (1989) and the next two (1990 and 1991) were staged in buildings on the Bloomsburg Fairgrounds. Although this location was very “functional,” the buildings were difficult to decorate in a way that captured the spirit of the season. A search in 1992 led TreeFest to the Caldwell Consistory in downtown Bloomsburg where the show has been ever since. This grand old building lends itself to the magical decorating skills of the TreeFest Committee.

Beginning the second year of the show, craft booths were added, where crafters from the area offered their wares for sale. The variety is extensive, and their presence adds to the holiday cheer.

After the move to the Consistory, TreeFest added what was then called “professional” trees, highly decorated trees done by local professionals such as florists. The trees are few in number, and because of the quality of the decorations, they are not typically donated to needy families. Today, these trees are called “showcase” trees and are decorated by local artisans.

Also added to the show is the gingerbread contest. Each year a theme is chosen, and local bakers and groups submit gingerbread artworks for display. The submissions are judged, and prizes are awarded. 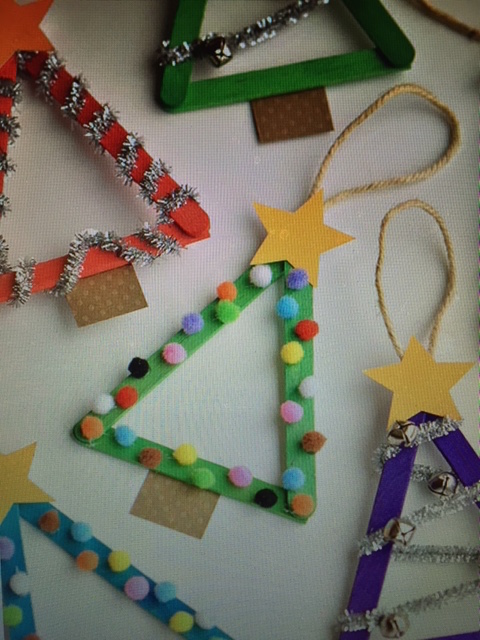 Over the years, there has also been a children’s area. It began as a place for young people to color a paper ornament that was then attached to one of two trees sponsored by our local newspaper, the Press Enterprise. This has evolved into a more varied activity, and the decorations are much fancier. Also, the children are able to create a craft ornament to take home with them. Volunteers from different groups assist young people in their creative activities. After the pandemic in 2020, the children’s area was closed due to safety. We hope to be able to bring the children’s area back in the future.

Beginning with approximately 50 trees on display, TreeFest has grown to more than 130 trees which are sponsored by local businesses and individuals. All the sponsored trees are decorated by local organizations ranging from the Girl Scouts to garden clubs and local social groups. For the most part, all these decorations are handmade around the theme chosen for the tree. A group led by a local social services organization identifies families in need throughout the region and following the show, these trees are donated along with their lights and other decorations.

In 1999, a local artist began painting a Victorian Christmas mural as the backdrop for the entertainment. This work of art stands 10 feet high and is 32 feet wide. Today it is a wonder to behold.

Entertainment has also become a beloved aspect of the event. It is donated by the participants and has included school choirs, dancers, musicians, storytellers, and other groups. In 2003, opening night featured an evening of barbershop entertainment. One special group is the youngsters from the YMCA Preschool. When they perform, there are more video cameras in the audience than there are children on the stage.

As a benefit, TreeFest is a tremendous success. Important in its success is the overall impact that TreeFest has on the community in the Bloomsburg area. There are as many as 2,000 people who take part in presenting this show. Over 3,000 adults and children attend during its 2 weekends. TreeFest is truly a win/win for all who participate in making it happen!

We look forward to many years of beautiful shows and service to the community.